I should have posted this last spring and fall, but haven't had a chance. Better late than never. As we head into the spring 2011 season, it will be helpful to recall what was done last year.
Dr. Jim Cane from the USDA Bee Labs in Logan Utah has been studying Osmia aglaia for a number of years. Last season he had several of his bee mail shelters in the Sturm fields. We saw them in action in early June of 2010 (see last year's post from June 4). In this photo you can see three of the four shelters at the edge of the Sturm field. John is standing by a white shelter, and beyond are two blue shelters (visible in the larger version of this image that you can open by clicking on it.) To the right at the edge of the Sturm field is a large patch of Himalayan blackberry, a few days before bloom. To the left are the Sturm raspberries in bloom, but in need of some sun to bring on the bees. The Sturm fields extend off in the distance past the power lines.
Jim asked us to cover the openings of the shelters with plastic mesh to keep out bird predators. Here's what the shelters looked like inside both before and after covering. It was an overcast day for the most part, but the first day without rain in a couple of weeks. The blue shelters were darker than the white and yellow shelters. The yellow shelter showed the most signs of bee activity. 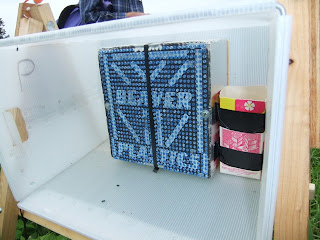 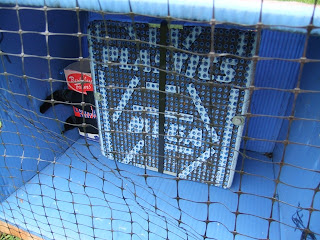 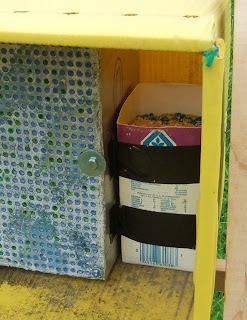 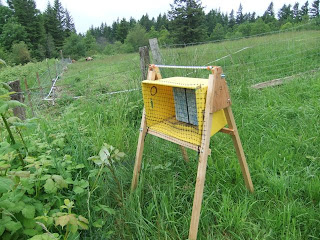 Note that there are a couple of bees sunning on the floor of the white shelter, but nothing in the blue shelter. The yellow shelter has a ring of dirt around the floor (Jim, from 2010 or previous years?), and there are a bunch of males waiting on the milk carton of filled straws for sufficient warmth to fly.
In fact, while we were covering the shelters with mesh, the sun burned through the haze just enough to warm the bees. This was the first time the sun had been out in days, and it didn't stay out long. But during that time we saw male O. aglaia sunning and foraging a little on the raspberry flowers. 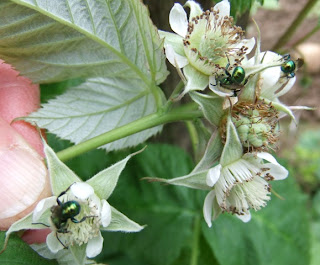 Jim tells me that by fall 2010 he recovered 24,000 live O. aglaia, and would have had 8000 more but for the unwaxed new straws that the manufacturer sent (provision moisture wicked into the straw, leaving a provision mass that was dry). (Not a problem in our wood Binderboard).
Still, it's clear that these bees are doing well on the berry farm. Question is, did they pollinate the commercial raspberries as welll as the Himalayan blackberry?