Equipment Needs for the Project

Grant funds should be available very soon, so the Oregon Berry Bee Project can move forward. The Sturms will be purchasing a webcam, solar panels and other equipment.

As part of the process of choosing equipment, our engineering expert, Mike and I had a long conversation about what we wanted to do with the camera. Here’s the requirement list that Mike generated from that discussion:

These were some of the characteristics of the system that Mike came up with based on what we wanted to do with the camera, and its location:

Given these guidelines, Mike researched cameras, solar panels, and other equipment.

Originally my thought had been that we might use two different cameras, one to watch the bee nests, and the other to monitor the bloom. I also originally thought that we would power the camera with a cable, which would have forced us to put the bee shelter within 300ft of the Sturm’s barn. When Mike suggested that we try solar power, we gave up on the idea of using two cameras so that we would have money available for a solar panel.

Instead, Mike recommended that we use an AXIS 215 PTZ Network camera. Here’s the specs:

The Zoom listed is in optical values only. Digital zoom is ignored for several technical reasons.
Lux - the minimum amount of light required to produce an image. The lower the number, the better the sensitivity, although for the purposes of this project, a low-light camera was not considered useful. Outputs shown are maximum values in pixels. The higher, the better defined the image will be. This camera will cost us about $1000.

The zoom and pan tilt functions will allow us to move the camera to preset positions getting close ups of the bees’ nests or longer shots of the berry vines in bloom.

This camera model is not intended for outdoor use, so Mike will be building an equipment shelter to house everything. As for our desire for weather data, we will place a digital thermometer in the bee shelter that the webcam can read.

In addition we will be ordering a solar panel & battery charger, along with the deep cycle battery and the wireless link for the camera. The system will be integrated and tested at Mike’s lab prior to installation at the Sturm Farm.
Posted by Karen @ Pollinator Paradise at 3:27 PM No comments: 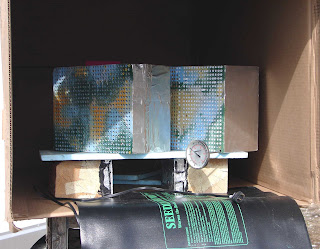 Back in April Dr. Jim Cane sent me this image of a incubator for O. aglaia. "Basically a box with a seedling grow mat on the floor and a thermometer. Big box in this case because we are loosely stacking in our foam nesting blocks with nests. No risk of overheating because the low wattage grow mats can’t heat to more than about 80F. I do not yet have a consistent response to duration of incubation…some years just a few days, others nearly a week."

"...one simple yet handy observation you can make are the weather conditions under which you do or do not see foraging activity at nesting blocks (Osmia aglaia) or at flowers (groups you can recognize, like honey bees, bumblebees, etc.). Shade temperature, sunny or not, calm or not, active or not, hour of day.

"My impression with O. aglaia is that 60F, calm and sunny is about their minimum threshold for flight. In contrast, here the other day I had blue orchard bees flying at my nest blocks at 45F (!), again sunny and calm in between snow squalls."

We should try to get more of this data next year. Hopefully once we have a webcam running, with a thermometer in the bee shelter, we'll be able to gather this information remotely.

I wonder if our solar panel will generate enough power to run a grow mat as well as the webcam? Otherwise a grow mat is not a viable option for us.
Posted by Karen @ Pollinator Paradise at 11:07 PM No comments: 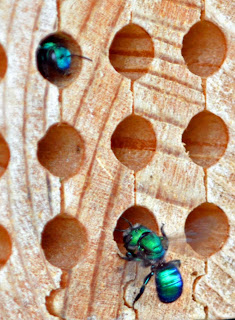 Our project was on hold for the month of May while I spent time helping my mother recover from eye surgery. What was supposed to be a 5 day trip turned into a month long visit. The Oregon Berry Bee Project is getting back on track now.

On Thursday, June 4, Steve and Mike visited the Sturm farm to see how the bees were doing. Steve noted that lots of adult bees were sitting in the emergence boxes waiting to emerge. The boxes were in the back of the shelter. He thought perhaps they didn’t have enough light to see the emergence hole. When he opened the box, many bees emerged. Soon there was lots of bee activity at the Binderboard® nests. That afternoon he saw bees plugging the first complete nests, so presumably some bees had already emerged.

Jim Cane warned me that the bees might need incubation to emerge in time for raspberry bloom. Perhaps warmth, not light was what the adults in the emergence box needed. Perhaps both warmth and light.

Steve also noticed that quite a few O. aglaia were on the ground sunning. Mike took some great photos, below and top of this post. When I first saw O. aglaia nesting in alfalfa leafcutting bee blocks in Medford, OR, I recall many bees sunning on the ground as well. We’ll have to spend some time next year trying to understand when and why they do this. (All of these photos are female O. aglaia) 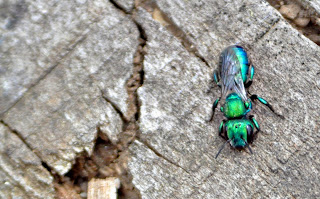 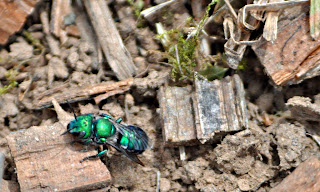 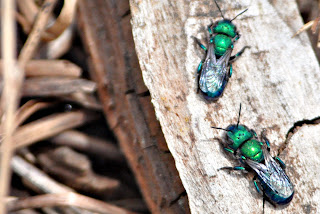 Note: These females are about 1/4 inch long. There are also metalic blue individuals.
By late afternoon Steve estimated that about 90% of the bees in loose cocoons from last year had emerged.

On June 4 the Raspberry vines had lots of developing berries and only a few flowers left. Steve estimates that raspberry vines were 90% fruit and10% blooms. The emerging O. aglaia probably had a distance to fly to blackberry and marrionberry vines which were in full bloom. We’ll have to keep that in mind and be sure to come in May next year to observe raspberry pollination.

Steve set up another shelter for O. aglaia closer to both the marionberry and blackberry vines, located approximately 400 yards from the original site. Rosie had two more leafcutter Binderboard to put in the shelter, and Steve used one. Steve put the straws with O. aglaia into that shelter, since many of the bees in straws apparently had not yet emerged. Steve placed the straws in a watertight container which he then attached to the shelter to keep it out of the rain. As it turned out, a terrible weather cell hit the farm and surrounding areas that very same afternoon and evening!

I’m getting the impression that O. aglaia emergence is better timed with blackberry than with raspberry. We will have to warm them more than we thought to get them out for raspberry bloom. On the other hand, we could use O. lignaria for raspberry pollination; their emergence could easily be delayed.

Steve and Rosie toured the fields, observing the “catch” Binderboards on the perimeter, and found that there was a small amount of activity, and a sealed chamber at two of the six sites visited. The Himalayan blackberries were in full bloom, like the cultivated blackberries.

Don commented that this is the best pollination that he has seen on his three acres of black raspberries. They are now four years old.

Meanwhile Mike, our webcam expert, has prepared a list of equipment that the Sturms will order as soon as the grant money comes through. More about that next.
Posted by Karen @ Pollinator Paradise at 10:57 PM 2 comments: