Preparing Berry Bees for the Winter 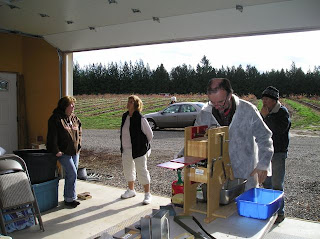 Jerry, John, Glen and I visited Sturm Berry Farm on November 18 to see how the Osmia aglaia fared during the summer, to prepare the cocoons for winter storage and to clean the Binderboard® nests so they are ready to go out next spring.

Rosie removed the Binderboard® from the field in late September or October and stored them. When we arrived at the farm at 9:30am she met us with the Binderboard® in her truck, and escorted us to the garage of their house where we set up tables and equipment for the operation. 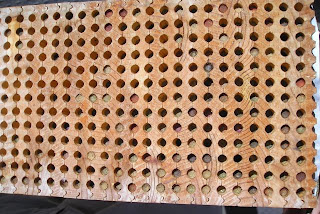 At first glance, the Binderboard® from the main shelter (under the power lines, see “Our Project Begins”, April 27) did not seem to have filled very well. Only about 25% of the tunnels were plugged at the surface. But when I put the board in the sun and looked down the tunnels, I realized that most had plugs recessed about a centimeter deep, and all of the boards from the main shelter were nearly full! Jerry was delighted. He has spent too much time cleaning Binderboard® that are only partially filled, and notes that it takes about as long to clean a partially filled board as a full one. 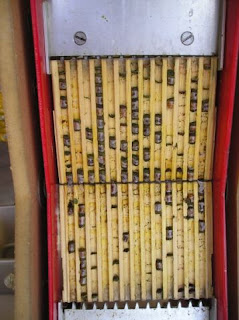 This photo shows two adjacent laminates that have been opened in Jerry’s cleaning machine. Some of the cocoons stuck to the top laminate, and some to the bottom laminate. In the fourth row from the left, all 9 cocoons stuck to the top laminate. Note that the mother bee left a small intercalary cell between the two innermost cocoons, and a small vestibular cell above the outermost cocoon. Intercalary cells have plugs on both end, but they are empty. Vestibular cells are also empty, except they are just behind the nest plug, the vestibule of the nest entrance, as it were.
The other nests between these two laminates had fewer cocoons, and intercalary cells were common. The middle tunnel, for example (7th from either side) has intercalary cells between each of the first 4 cocoons, then three adjacent cocoons, then a large vestibular cell just below the plug. I’m using the names that Karl Krombein gave to the parts of twig-nesting solitary bee and wasp nests in his ground-breaking book “Trap-nesting Wasps and Bees”.
Some of the cocoons contain adult O. aglaia, but some of the cocoons, more reddish in color, contained live prepupae, the final instar larvae. More on them in a future blog. 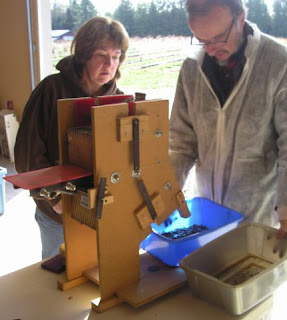 Rosie is getting a close look at Jerry’s cleaning machine in action. It mainly provides support for long Binderboard®, holding them in place during the cleaning process. Jerry is using a hand-held scraper to remove cocoons from all 13 tunnels per laminate in one motion. Actually, he is taking two swipes, one from the top to the center, and one from the bottom to the center. All the cocoons fall into the blue pan at the bottom. When the cocoons have been removed, Jerry moves the blue pan out of the way and replaces it with the grey pan. He uses a paint brush about the width of the laminate to brush bleach water on the laminates, and uses several scrub brushes to remove debris from the tunnels. The waste bleach water and debris fall into the grey pan. Then Jerry uses gripping teeth to open and lock into place the next two laminates. The gripping teeth are visible in the photo of the nests, above. In the view to the left you can see the cleaned laminates loop back around under the red shelf that holds the filled laminates.
The Binderboard® give us a good view of the nests, and Jerry’s platform speeds the process of cleaning the boards and preparing them for the next season. We were able to clean all of the boards at the Sturm farm in one 7 hour day with only one person scraping the nests. If bee populations continue to increase, this hand cleaning process could take more time than a grower wants to put into managing bees. Jerry hopes to add a motor to control the scraper and automate the cleaning process. That should cut down the time to process large numbers of bee cocoons and save the grower time and money. 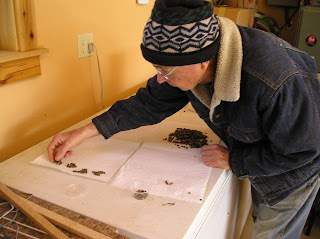 Once the cocoons have been removed, it’s time to estimate our yield. Here’s Glen counting out cocoons in a ½ cup sample. We took 3 such samples. There isn’t much dimorphism between the sexes in size of the cocoons, unlike Osmia lignaria, so for this species we haven’t bothered calculating a sex ratio. However, we could by opening a small sample of cells to see what’s inside.
We found that there was an average of 310 cocoons per half cup, plus 17 cocoons with prepupae, about 5%. 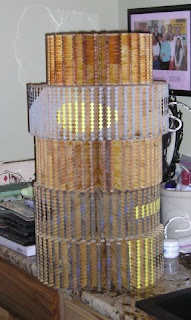 Once the boards have been cleaned, we brought them into the heated mud room next to the garage to dry out.
At the end of the day we replaced the bolts and wing nuts, and tightened them as far as possible. The Sturms should tighten them more in a few days, and again in the spring when the bees are released. 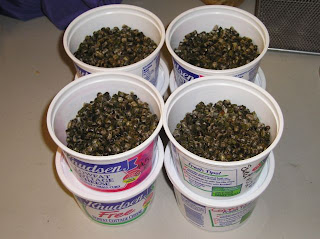 And here is our final yield, divided among 8 cottage cheese containers, each holding a little over 1.5 cups of cocoons for a total of 13 cups. At 600 cocoons per cup, that’s an estimated 7,800 total cocoons. We released about 1500 O. aglaia cocoons raised on Sturm farm last spring, as well as about 1800 O. aglaia cocoons in straws that Dr. Jim Cane from the USDA Logan Labs gave us. The total release then was about 3,300 bees. We were able to more than double the population: a 2.3 fold increase. Perhaps we could have done better if there had been another Binderboard® to put out as the boards filled.

Dr. Cane sent O. aglaia cocoons to several other researchers and he reports an increase in all of our populations. That’s great news, and very promising for berry pollination.

Next year we’ll need more Binderboard® to support the increased population!
For now the cocoons are being stored on the porch of the Sturm home, where they will be exposed to outdoor temperatures. They are in a planter, covered with a wooden tray. 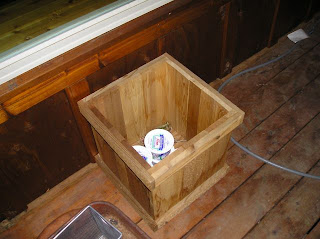 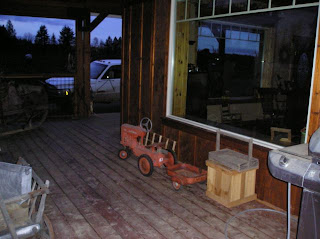 Posted by Karen @ Pollinator Paradise at 5:54 PM No comments: