Notice that I won't say what's pollinating the raspberry leading to mature fruit. In many cases when bees visit a flower, they pollinate it, but not always. The only way to be sure would be to carefully control the visits that a flower gets by particular bee species, and then to follow the flower through fruit development. 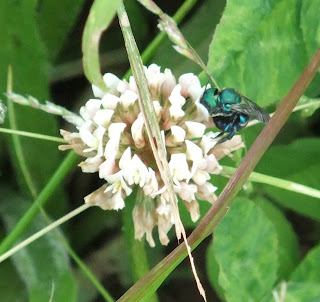 When the sun poked tentatively through the clouds on the morning of June 16, the first foraging O. aglaia that we saw were visiting white clover and dandelion. These were the closest flowers to the webcam shelter. The O. aglaia seemed to be taking nectar but not pollen. 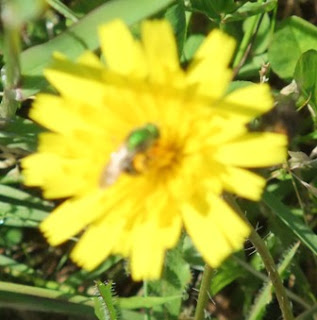 Sorry about the blurry image. It documents that O. aglaia foraged from dandelion. (Actually, on second thought this looks like it might be Agapostemon or Augochlora! - July 20) 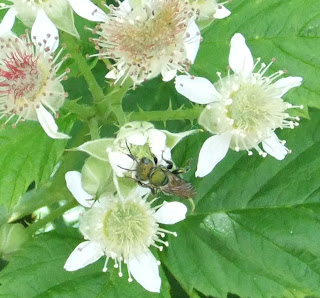 When the afternoon turned sunny, we saw O. aglaia on the black raspberry flowers! They move rapidly, so they are hard to photograph on the flowers, but I managed to get a few photos of the foraging females. The first female is visiting a bud that is just starting to open.


I'm pretty sure that's a nectar visit. According to McGregor (Insect Pollination of Cultivated Crop Plants, Agriculture Handbook No. 496, 1976): "When the flower opens, the anthers are immature, with the filaments bent over the immature styles. Subsequently, the outer stamens bend back toward the petals and their anthers dehisce. As dehiscence progresses toward the center of the flower, the receptacle expands, the styles grow, and the receptive stigmas appear at their tips; later, the anthers nearest the stigmas dehisce, and, if cross-pollination has not already been brought about by insects, some selfing may result. The degree of such selfing seems to vary with species and cultivar, but most of them are largely self-sterile." 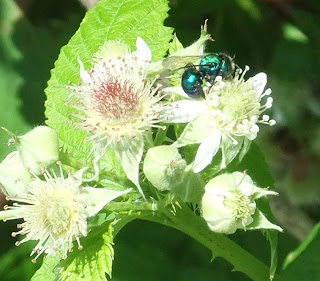 It's hard to be sure from this photo, but it is possible that there is a little pollen on the underside of the abdomen of this bee. We looked hard to try to determine if there was pollen in the scopae of bees returning to the nests, but did not see any either on foraging bees or on bees returning to the nests. I suspect that the O. aglaia were just beginning to search for nesting sites at this time. 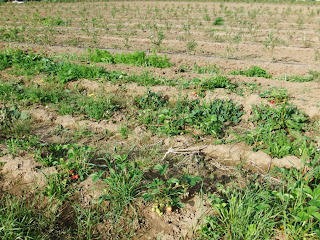 A variety of other weeds were available in the area around our bee shelters, but none as abundant as white clover and dandelion. In addition, there were two crop species near the webcam shelter. South of the shelter was a small strawberry patch with blooms as well as immature and ripe berries. Just east of the strawberries were some blueberry plants in bloom. See the earlier post about bee introduction in May. On June 17, a sunny day, I saw few bees visiting the blueberry: especially compared with raspberry visitation. There were a few bumble bees. I saw some O. aglaia sunning on the ground in the blueberry patch, and I'm pretty sure that a couple of them flew up to the blueberry flowers, but I didn't get a good look at them.

Here's a photo from the west side of the Sturm fields. The white shapes on the left are honey bee hives. 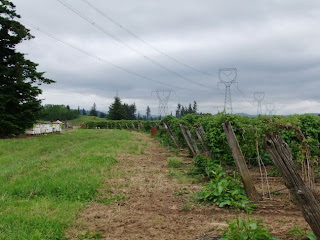 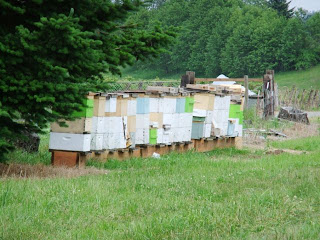 Don doesn't pay anything to get honeybees in his berry fields. Rather, he works with a beekeeper who is happy to bring hives to Don's field because of the absence of insecticide sprays. On June 16 I counted 19 hives with a total of 50 supers in this row near the west end of the fields. Then on June 17, the beekeeper added 24 more supers in 10 hives closer to the marion berries where our second Osmia shelter is located. I hope that's all that were brought to the field. The honey bees are likely to have an impact on the growth of the O. aglaia population. 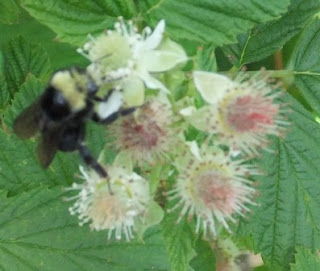 Bombus vosnesenskii is one of the species of bumblebees foraging on the black raspberry.
She is apparently only taking nectar, because there does not appear to be any pollen on the corbicula of her hind leg. 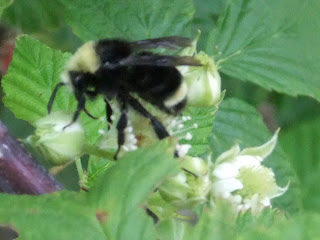 One mystery that we never solved: What were the Osmia lignaria visiting? They were active at the shelter, even in the cold June 16 morning. They seemed to fly toward the blueberries, but I did not see them foraging on blueberries or raspberries. The nearby maple trees had developing fruit, so they were not attracting bees. So, it's not clear if the blue orchard bee was contributing to pollination of any berries.

Posted by Karen @ Pollinator Paradise at 4:43 PM No comments: 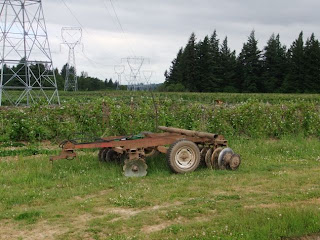 John and I visited the Sturms on June 16 and 17, soon after the black raspberry started to bloom. Marion berry was also in bloom, as seen in this photo from the center of the fields.

The previous week had seen a couple of sunny days which brought out the bloom, but for the most part, the weather had been cold and damp all spring. Sun was predicted when we set out for Corbett, but on the morning of June 16 it was still overcast, with a temperature of 52oF at 10:24am.
When we got to the shelter next to the webcam (not yet functional), the first thing we did was remove the lids from the Osmia aglaia emergence containers and move them to the front of the shelter, in hopes that the bees would warm up quicker and fly. There were lots of emerged adult O. aglaia amidst the frass in the containers. It amazes me that they were still alive, since they probably had only one or two days of good weather since they had emerged about a month earlier. But the morning of the 16th they were not doing much. Here's what the shelter looked like after we arrived and opened the containers. 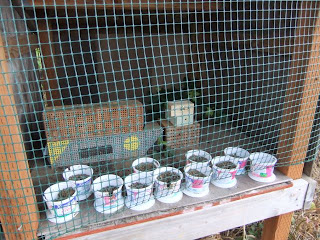 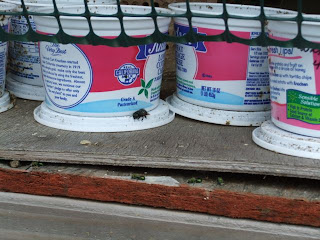 As the morning started to warm, O. aglaia began to appear from under the floor of the shelter where apparently quite a few bees, especially males like these, were hiding. Osmia lignaria (the big black bee sitting on the container lid) were more active than O. aglaia, but they also spent much of their time resting or waiting for the sun. 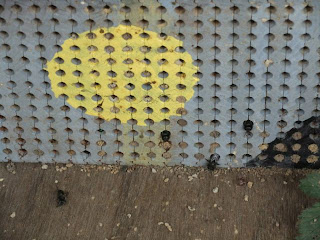 Our second stop was the shelter in the center of the fields, near the marion berries. The photo at the top of this post was taken from that shelter. It has only two O. aglaia emergence containers. Here we also opened the emergence containers to encourage the bees to fly. The O. lignaria were active. 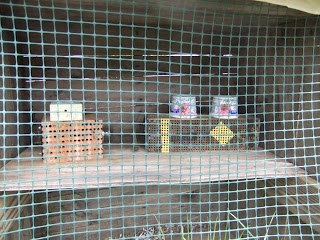 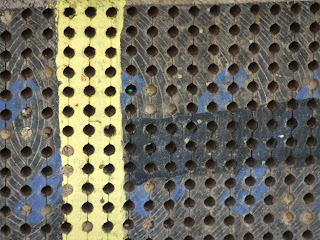 A closeup of the O. aglaia Binderboard shows an O. aglaia abdomen in one of the nest tunnels. However, most of the plugs in these 1/4" tunnels are O. lignaria plugs of chunky mud. 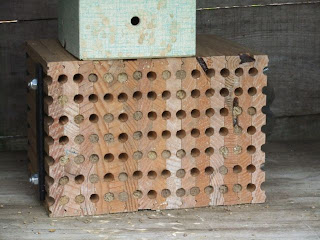 The O. lignaria Binderboard in this shelter already has 43 plugged nests out of 98 available. Probably the unplugged tunnels have nests under construction.

Despite the cool, overcast conditions, there were lots of bees flying on the black raspberries, though they were not the Osmia. We saw plenty of honey bees and at least two species of bumble bees. There were bees flying fast above the berry bushes, too fast to identify. However, when I caught them with my net, they turned out to be bumblebees.

More about our visit to Corbett in the next post...

Posted by Karen @ Pollinator Paradise at 2:28 PM No comments: 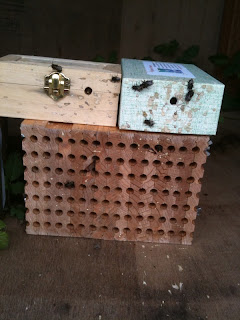 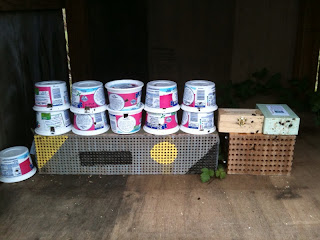 Rosie sent me an e-mail on May 10 with this message: Hi Karen
Put some out yesterday and the rest today. Everybody wants out so I hope ok. Black rasp. not in bloom yet. Blues real real close nice day would do it I was standing at shelter when I took the pictures of the fields close by. Some dandelions by shelter they are thick this year. Need to put out rest of nests for them also.
Rosie

Both Osmia lignaria and O. aglaia were coming out of their cocoons despite the lousy weather and lack of raspberry bloom, so it was time to get them into the field. The photos are from her cell phone. At the top are two images from the shelters in the raspberry fields showing the nests and emergence containers with bees coming out. Below is a close up of the O. aglaia cocoons and adults in one emergence container (actually, a cottage cheese container with an emergence hole). 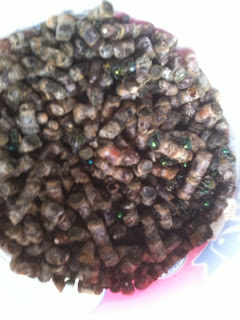 Rosie saw blue orchard bees on the dandelions in bloom near the shelter. Here's a male O. lignaria. 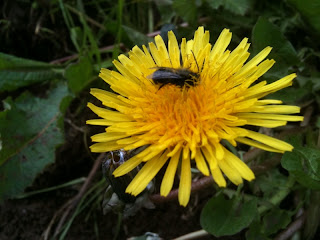 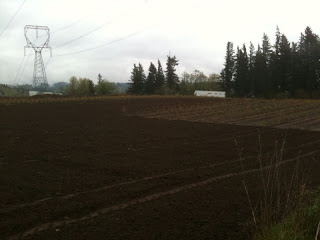 Some blueberries have already been planted at the far east end of the field, and 100 yards southeast of the bee shelter. The rectangle of lighter colored soil on the right side of this picture is the closest blueberry field. As you can see, there was plenty of mud available for the orchard bees that day. 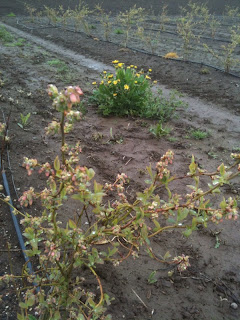 The blueberry plants were in bloom in May, along with the dandelion. I think there is an orchard bee in one of the flowers on the right side of the plant, an inflorescence under the dandelions. It would be nice if the orchard bees proved to be good blueberry pollinators.
Posted by Karen @ Pollinator Paradise at 3:11 PM No comments: