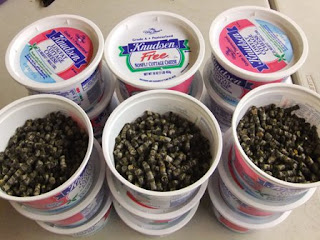 We returned to Sturm Berry Farm last Saturday, November 20, to clean the Binderboard and see how the Osmia aglaia fared this past season. Jerry brought his cleaning machine, but John and Glen cleaned quite a few nests by hand. We saw very few parasites, resin bees, or other undesirable intruders. One board had some white mold in the center. There may be some cocoons from other local species of Osmia with similar nest construction. However, we are not concerned about them, because they may be good berry pollinators, so they are welcome. Basically, we were quite pleased with the yield of bees. 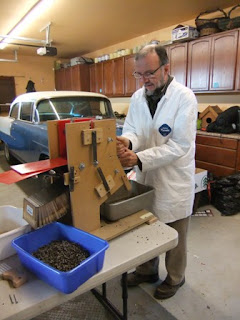 We removed 31 cups of cocoons, with an average of about 700 cocoons per cup, for a total of about 21,700 cocoons for next year! That’s quite impressive considering that the O. aglaia were not able to do much foraging for several weeks at the beginning of the season. This year we saw a 2.7 fold increase in our bees. We had about 4000 empty tunnels for approximately 4000 females. We might have been able to raise even more cocoons for next year if we had more nests to put out. This spring we are going to need about 10,000 tunnels to accommodate all of the females that we expect from this year’s bee yield.

That’s the good news. The bad news is that pollination on the black raspberry was very poor last spring. O. aglaia activity was too late. Though I saw bumblebees and honeybees foraging on the 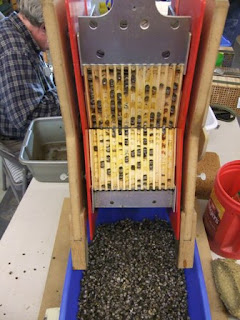 black raspberry at the end of May, there apparently wasn’t enough activity from them to do much pollination. Since black raspberry is the most difficult variety to pollinate, and the main reason that we originally wanted to try O. aglaia, it’s looking like the berry bee is not going to be as useful as we hoped, at least in a year with a cold, wet spring.

So, we are planning to put O. lignaria in the black raspberry shelter next spring, in hopes that they will emerge early and forage from the early raspberries when the berries come into bloom. O. lignaria should be more active in cool weather. If they prove useful for black raspberry, we should be able to increase their numbers. Meanwhile, we will use O. aglaia to pollinate berry varieties that bloom at the same time and after Himalayan blackberry.
Posted by Karen @ Pollinator Paradise at 11:06 PM No comments: